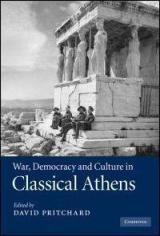 Upon the completion of his research fellowship at the University of Edinburgh, CC’S Anastasia Bakogianni caught up with Dr David Pritchard of the School of History, Philosophy, Religion and Classics at the University of Queensland.  David tells us about his new research project Democracy’s Impact on War-making in Ancient Athens and Today. In the modern world Classical Athens is associated with the institution of democracy and its rich cultural output, but in the fifth century BCE it was an imperialist and bellicose polis that took pride in its military prowess.

David explains how sport and warfare were closely linked in ancient Athens. Sportsmen were members of the elite, but they were celebrated by the democratic polis. For Athenian men arete in all types of competition was the ideal to which they aspired. David has explored these issues in his monograph Sport, Democracy and War in Classical Athens (CUP, 2012) and in his edited collection War, Democracy and Culture in Classical Athens (CUP, 2011). 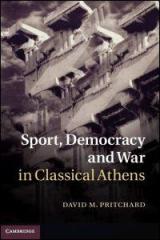 On the modern stage Greek tragedy is often used as a tool to criticise the abuse of power and to condemn war. Euripides’ Troades, which portrays the suffering of the women of Troy, has become a vehicle for delivering this anti-war message. David points out that in a number of his dramas, like the Suppliants and Children of Heracles, Euripides celebrates Athens’ success in war. The democratic polis and its citizens valorised victory in all arenas of life.

2 thoughts on “The Dark Side of Democracy, with David Pritchard”