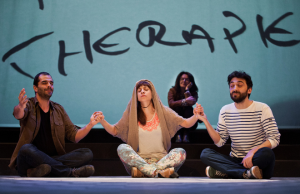 This week’s vodcast features Greek artist Prodromos Tsinikoros talking about his recent theatre production ‘Telemachos: Should I Stay or Should I Go?’

Created together with Anestis Azas and Jens Hillje and premiered in January at the Ballhaus Naunynstraße in Berlin, the production centred on a group of Greek immigrants who have moved to Germany  at different points since the 1960s, using themes and motifs drawn from Homer’s Odyssey to explore contemporary issues of displacement and economic crisis.

As the performance notes explain: “The older generation of immigrants, the Gastarbeiter, and Greeks fleeing the current economic crisis meet in an on-stage production/documentary. The protagonists in this ‘theatre of the real’ are not actors but the Greeks of Germany themselves—old and young, university professors and manual labourers, casino owners and waiters. Each one a modern-day Ulysses, they tell their stories to the audience, either live on stage or in recorded audio-visual material. Alongside them, the young actor/director Prodromos Tsinikoris, who was born in Germany but lives in Greece, completes this contemporary rhapsody as another Telemachos, personifying his generation’s homeland dilemma: “Should I stay or should I go?”. Homer’s Odyssey, the monumental epic of wandering and homecoming, becomes the connecting thread running through this theatrical documentary.”
(Performances photos by Benjamin Krieg)
Click on the image below or follow this link to our YouTube channel to watch the interview with Prodromos.